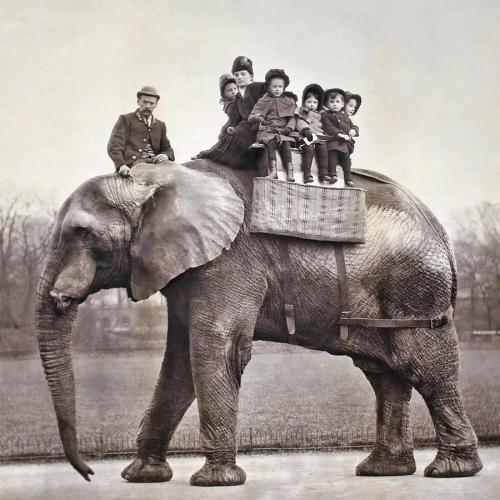 An anecdote from Matthew Scott’s biography of Jumbo the Elephant (1885):

Once when I was riding him around in the Zoological Gardens, in London, sitting on his neck, with about a dozen children on a panier-saddle across his broad back, we were proceeding down the path. It was on a delightful summer afternoon, and the grass plots, flowers, plants, and trees, which abound in those magnificent gardens, looked beautiful. I was engaged talking to the dozen “little folk” who occupied his back, and encouraging them to sit very quietly and not fall off, when all at once Master Jumbo came to a standstill for some cause or other. I shouted to him to go along, but for once he did not obey the order. As I turned round to see what was the matter, there was a lady running over the grass-plot on to the path, screaming and shouting, “Oh, my poor child! my child, my child! oh, he will be killed, he will be killed!” Well, I looked down from my elevation and saw Jumbo deliberately and coolly putting his trunk around the body of an infant that escaped its mother’s apron-strings and had run and fallen in front of Jumbo. Jumbo is a very careful walker, and always looks where he is going, and, like some others of God’s creatures, is rather slow in his movements, but both very sure-footed and thoughtful. He just stopped right there, gently picked up the child by the waist with his trunk, and laid it on the green grass beside its screaming mother, more tenderly than the mother afterward took up the frightened child in her excitement.

Jumbo was an African bush elephant who had been captured in the Sudan, exported to a zoo in Paris, and then, in 1865, moved to the London Zoo. Scott (at left in picture) was Jumbo’s attentive and beloved keeper. Despite widespread public protest, Jumbo was sold to the American circus tycoon P. T. Barnum in 1862; when the animal was transported to the United States, Scott went with him.

Jumbo was not named Jumbo because he was large. The word “jumbo”—meaning “large,” as in “jumbo jet”—originated by association with the animal.