Posted on December 4, 2020 by corvusfugit 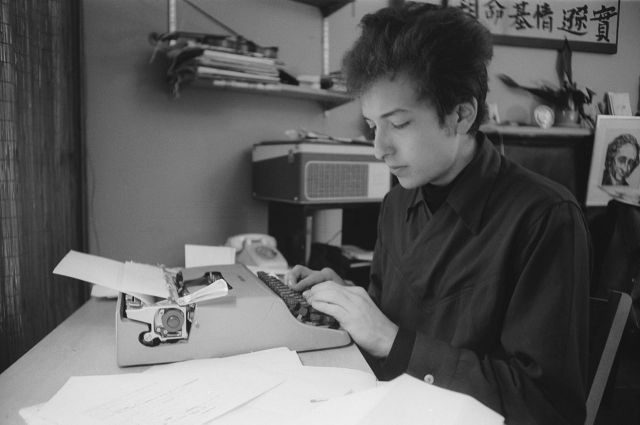 I can’t say when it occurred to me to write my own songs. I couldn’t have come up with anything comparable or halfway close to the folk song lyrics I was singing to define the way I felt about the world. I guess it happens to you by degrees. You just don’t wake up one day and decide that you need to write songs, especially if you’re a singer who has plenty of them and you’re learning more every day. Opportunities may come along for you to convert something—something that exists into something that didn’t yet. That might be the beginning of it. Sometimes you just want to do things your way, want to see for yourself what lies behind the misty curtain. It’s not like you see songs approaching and invite them in. It’s not that easy. You want to write songs that are bigger than life. You want to say something about strange things that have happened to you, strange things you have seen. You have to know and understand something and then go past the vernacular. The chilling precision that these old-timers used in coming up with their songs was no small thing. Sometimes you could hear a song and your mind jumps ahead. You see similar patterns in the ways that you were thinking about things. I never looked at songs as either “good” or “bad,” only different kinds of good ones.

Some of them can be true to life cases. I’d been hearing a song around called “I Dreamed I Saw Joe Hill.” I knew that Joe Hill was real and important. I didn’t know who he was, so I asked Izzy at the Folklore Center. Izzy pulled out some pamphlets on him from the back room and gave them to me to read. What I read could have come out of a mystery novel. Joe Hill was a Swedish immigrant who fought in the Mexican War. He had led a bare and meager life, was a union organizer out West in about 1910, a Messianic figure who wanted to abolish the wage system of capitalism—a mechanic, musician and poet. They called him the workingman’s Robert Bums.

Joe wrote the song “Pie in the Sky” and was the forerunner of Woody Guthrie. That’s all I needed to know. He’d been convicted on circumstantial evidence for a murder crime and shot by a firing squad in Utah. His life story is heavy and deep. He was an organizer for the Wobblies, the fighting section of the American working class. Hill is tried for killing a grocery store owner and his son in a petty holdup and his only defense is to say, “Prove it!” The grocers son, before he dies, fires off a shot at somebody, but there’s no evidence that the bullet ever hits anything. Yet Joe’s got a bullet wound and it looks pretty incriminating. Five people on the same night have bullet wounds and are treated in the same hospital, released, and they all disappear. Joe says he was somewhere else at the time of the crime, but he won’t say where or with whom. He won’t name any names, not even to save his own skin. There’s a general belief that a woman was involved, a woman who Joe does not want to shame. It gets weirder and more complicated. Another guy, a good friend of Joe’s, disappears the day after.

It’s all pretty twisted. Joe’s beloved by all workingmen nationwide—miners and meat cutters, sign painters and blacksmiths, plasterers, steamfitters, ironworkers—whoever they were, he united them and he fought for the rights of them all, risked his life to make things better for all the under-classed, the disadvantaged—the most poorly paid and mistreated workers in the country. If you read his history, his character comes through and you know he’s not the type who would rob and murder a grocery clerk at random. He just wouldn’t have that in him. It’s impossible he would have done something like that for a bit of change. Everything in his life speaks of honor and fairness. He was a drifter and protector and at all times on foot patrol. To the politicians and industrialists who hated him, though, he was a hardened criminal and an enemy to society. For years they waited for an opportunity to get rid of him. Joe was judged guilty even before the trial began.

The history of it all is amazing. In 1915 there were marches and rallies on his behalf that filled the streets in all the big American cities—Cleveland, Indianapolis, St. Louis, Brooklyn, Detroit, many more—wherever there were workers and unions. That’s how much he was known and loved. Even the president of the United States, Woodrow Wilson, tried to get Utah officials to look at the case again, but the governor of Utah thumbed his nose at the president.

In his final hour, Joe says, “Scatter my ashes anyplace but Utah.”

Sometime after that, the song “Joe Hill” was written. As far as protest songs went, I had heard a few. The Leadbelly song “Bourgeois Blues,” Woody’s “Jesus Christ” and “Ludlow Massacre,” “Strange Fruit,” the Billie Holiday song, some others—and they were all better than this one. Protest songs are difficult to write without making them come off as preachy and one-dimensional. You have to show people a side of themselves that they don’t know is there. The song “Joe Hill” doesn’t even come close, but if there ever was someone who could inspire a song, it was him. Joe had the light in his eyes.

I fantasized that if I had written the song, I would have immortalized him in a different way—more like Casey Jones or Jesse James. You would have had to. I thought about it two ways. One way was to title the song “Scatter My Ashes Anyplace but Utah” and make that line the refrain. The other way to do it was like the song “Long Black Veil,” a song where a man talks from the grave…a song from the underworld. This is a ballad where a man gives up his life not to disgrace a certain woman and has to pay for somebody else’s crime because of what he can’t say. The more I thought about it, “Long Black Veil” seemed like it could have been a song written by Joe Hill himself, his very last one.

I didn’t compose a song for Joe Hill. I thought about how I would do it, but didn’t do it. The first song I’d wind up writing of any substantial importance was written for Woody Guthrie.

But maybe Dylan did write it.

The song “”I Dreamed I Saw Joe Hill Last Night” was originally a poem written around 1930 by Alfred Hayes; the composer Earl Robinson set it to music a few years later. The song begins like this:

In 1967, Dyan came out with a song called “I Dreamed I Saw St. Augustine”; it starts like this:

I dreamed I saw St. Augustine
Alive, with fiery breath
And I dreamed I was amongst the ones that put him out to death
Oh, I awoke in anger, so alone and terrified
I put my fingers against the glass
And bowed my head and cried.

Joe Hill sent two telegrams sent to IWW leader Bill “Big Bill” Haywood shortly before his death. The second one did say “Could you arrange to have my body hauled to the state line to be buried? I don’t want to be found dead in Utah”—but the first one is more memorable: “Goodbye, Bill, I die like a true blue rebel. Don’t waste any time mourning. Organize!”