2016: His Strange and Awesome Fairy Tale Like House of Books 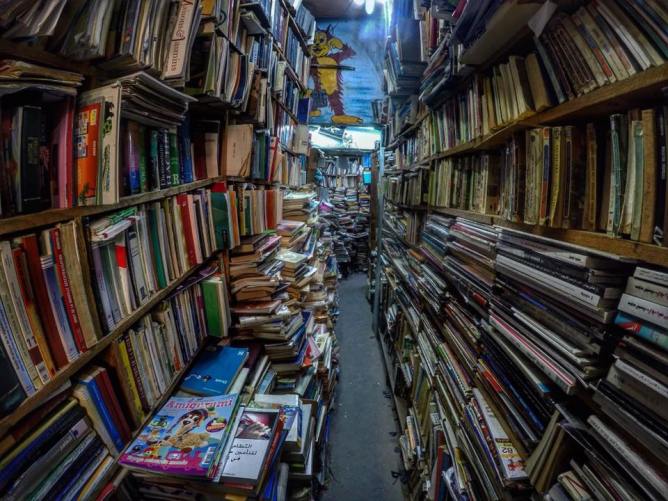 A few miles northwest of Tunis, with its sidewalk cafés and streets lined by rows of manicured ficus trees and its avenues named after European cities, there is a poor suburb of eighty thousand people called Douar Hicher….In November, I was shown around [the city] by Mohamed, a local engineer in his late twenties. Mohamed, who grew up there, said, “The friends I was studying with in high school and boxing with—ninety per cent have gone, and not to Italy. They went to Syria and Iraq. There are no longer any young people.”

….A friend of Mohamed’s, an unemployed telecommunications engineer named Nabil Selliti, left Douar Hicher to fight in Syria. Oussama Romdhani, who edits the Arab Weekly in Tunis, told me that in the Arab world the most likely radicals are people in technical or scientific fields who lack the kind of humanities education that fosters critical thought. Before Selliti left, Mohamed asked him why he was going off to fight. Selliti replied, “I can’t build anything in this country. But the Islamic State gives us the chance to create, to build bombs, to use technology.” In July, 2013, Selliti blew himself up in a suicide bombing in Iraq.

Dabbaghine street is a street in downtown Tunis known for its old bookshops. One of the bookshops owner uses abandoned upper-floors of his small building to store the stock of old books. Tunisians are not very eager of reading so the sells are not that great and the accumulation of hundreds of unsold books filled the whole buildings even the stairs. The owner kindly accepted to let me visit and shoot his strange and awesome fairy tale like house of books. (source)