Posted on October 9, 2017 by corvusfugit 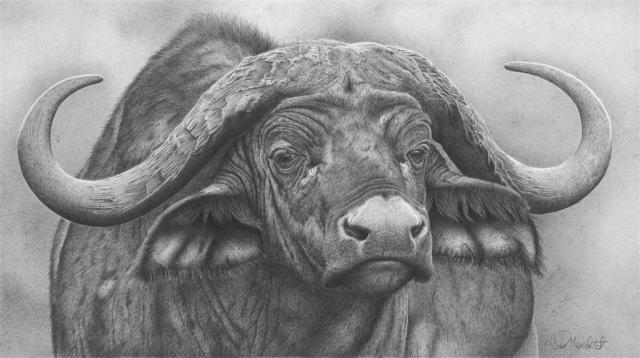 Dutch ecologist H. H. T. Prins describes how he first came to realize that buffalo vote to determine which direction the herd should move to find grazing land:

Let me first describe what takes place when a buffalo herd in Manyara starts grazing in the evening. Before they start, they are resting in the afternoon. This nearly always means that the herd is lying down some-where on the mudflats along the lake shore. Typically it is about 28 to 30°C, and there is a slight breeze from the lake towards the escarpment (that is from the east to southeast). Most animals have stopped chewing the cud (about 70%), a few buffalo are standing (1%), and some are lying on their sides and using their horns as a neck-rest (5%). Adult bulls are not searching for adult cows in oestrus and calves are not pestering their mother for milk. It is normally completely quiet and it seems that nothing is happening. However, this is not the case.

Around 17.00 to 17.30 hours a subtle change takes place. It also occurs in less pronounced form in the morning before the midday grazing bout. It took me 2 years of observation to notice this change of behaviour: some buffalo cows arise, shuffle around a bit and bed down again. At first I interpreted this as “stretching the legs,” but one day I noticed that the cows adopt a particular stance after the shuffling and before lying down again. They seem to gaze in one direction and keep their head higher than the normal resting position but lower than the alert. This they do for about 1 minute only. That day I also noticed that most of these cows “gazed,” sequentially, in the same direction: sequentially, because only very few cows are standing at the same time — in the large Central Herd (about 950 animals) one will see at most 15 animals standing but normally only about five. This standing up, gazing and lying down behaviour continues for about an hour, but the overall impression remains that of a herd totally at rest.

Then at about 18.00 hours there is a sudden energizing of the herd. This nearly always occurs when the sun hits the escarpment to the west of them; when the shadow of the escarpment moves over the herd, everywhere in the herd animals become active. Animals that sleep on their side (mostly subadult and adult bulls) suddenly lift their head, calves rise and start nudging their mothers to rise, many buffalo literally stretch their legs when standing and many animals defecate or urinate. The sun hitting the escarpment appears to work as a Zeitgeber for the buffalo, indicating that they have to go “back to work.” Within a few minutes, here and there in the herd some subadult bulls start sparring, adult bulls look around for oestrus cows and adult cows allow their calves to suckle, but grazing rarely takes place. A few moments later, everywhere in the herd buffalo start trekking. The exciting thing is that they start trekking, at the beginning independently of each other, in the same direction. Within seconds, the animals that initiate these movements are followed by other individuals, dusters of movement arise, and within about 3-5 minutes the whole herd of hundreds of individuals moves as if conducted by one master. They totally give the impression that they know where they are going to: apparently, some decision has been taken in the group.

Prins reports that the final movement of the herd differs from the average direction of the individual gazes within an average deviation of only 3°; if there is a strong difference of opinion among the cows, the herd tends to split and graze in separate areas. Only the female buffalo vote and Prins finds no evidence for individual leadership.

Source: Ecology and Behaviour of the African Buffalo: Social Inequality and Decision-Making (1996)