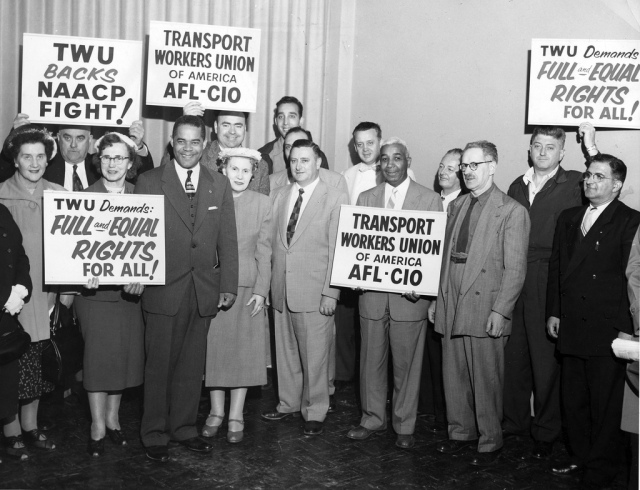 “The salvation of our world lies in the hands of the maladjusted.” MLK speaks at the 1961 Transportation Workers Union convention:

There are certain words in every academic discipline which soon become stereotypes and clichés. Every [academic] discipline has its technical nomenclature. Modern psychology has a word that is probably used more than any other word in modern environment. It is the word, “maladjustment.” Certainly, we all want to live the well-adjusted life in order to avoid neurotic and schizophrenic personalities. As I come to my conclusion, I say to you, today, that there are some things in our social order toward which I am glad to be “maladjusted,” and I call upon you to be “maladjusted.”

I never intend to adjust myself to slavery and segregation.

I never intend to adjust myself to religious bigotry.

I never intend to become adjusted to economic conditions that will take necessities from the many to give luxuries to the few.

I never intend to become adjusted to the madness of militarism, for in a day when sputniks and explorers are dashing through outer space, and guided ballistic missiles are carving highways of death through the stratosphere, no nation can win a war. It is no longer a choice between violence and non-violence. It is now either non-violence or non-existence.

And I never intend to adjust to the madness of militarism and the self-defeating effects of physical violence.

And so I call upon you to be “maladjusted” and continue in the maladjustment that you have already demonstrated, for it may well be that the salvation of our world lies in the hands of the “maladjusted.” And so, let us be maladjusted.

If you will allow the preacher in me to come out now, let us be as “maladjusted” as the Prophet Amos, who, in the midst of the injustices of his day, cried out in words that echo across the centuries: “Let justice run down like waters, and righteousness like a mighty stream.”