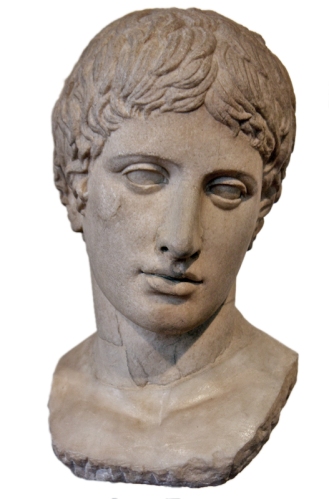 Galatea, daughter of Eurytius, who was son of Sparton, married at Phaestus in Crete Pandion’s son, Lamprus, a man of good family but without means.

When Galatea became pregnant, Lamprus prayed to have a son and said plainly to his wife that she was to expose her child if it was a daughter. When Lamprus had gone off to tend his flocks, Galatea gave birth to a daughter.

Feeling pity for her babe, she counted on the remoteness of their house and—backed by dreams and seers telling her to bring up the girl as a boy—deceived Lamprus by saying she had given birth to a son and brought the child up as a boy, giving it the name Leucippus.

As the girl grew up she became unutterably beautiful. Because it was no longer possible to hide this, Galatea, fearing Lamprus, fled to the temple of Leto and made many a prayer to her that the child might become a boy instead of a girl, just as had happened to Caenis, daughter of Atrax, who by the will of Poseidon became Caeneus the Lapith.

So also Tiresias changed from man to woman because he had encountered and killed two snakes that had been mating at a crossroads. He changed again from woman back to man by killing another serpent. Hypermestra had frequently sold her body in the form of a woman for a fee, becoming a man to bring food for her father, Aethon. The Cretan, Siproites, had also been turned into a woman for having seen Artemis bathing when out hunting.

Leto took pity on Galatea because of her unremitting and distressed prayers and changed the sex of the child into a boy’s. In memory of this change the citizens of Phaestus still sacrifice to Leto the Grafter because she had grafted organs on the girl and they give her festival the name of Ecdysia [“Stripping”] because the girl had stripped off her maidenly peplus. It is now an observance in marriages to lie down beforehand beside the statue of Leucippus.