Posted on November 2, 2017 by corvusfugit 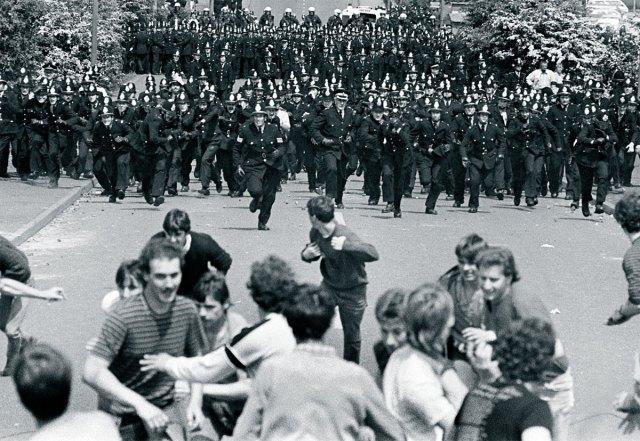 On June 18, 1984, 5,000 picketers—members of the UK National Union of Mineworkers and their supporters—arrived at the British Steel Corporation coking plant in Orgreave, South Yorkshire, determined to prevent scab trucks from leaving the plant with deliveries. They were met by 6,000 armed police officers equipped with riot gear and police dogs—as well as a unit of about 40 mounted officers.

The violent police assault that followed was a major event in the UK miners’ strike of 1984-85, with mounted police repeatedly charging the picketers, followed by foot squadrons of officers who beat the unarmed miners with batons.

At the time, many of the workers were charged with rioting, but by 1991, it was the police who were found guilty of  assault, wrongful arrest, unlawful detention, and malicious prosecution. In 2015, the Independent Police Complaints Commission found “evidence of excessive violence by police officers, a false narrative from police exaggerating violence by miners, perjury by officers giving evidence to prosecute the arrested men, and an apparent coverup of that perjury by senior officers.”

By that time, however, police violence had done its work and the strike had long been over. Involving more than 140,000 mineworkers, the strike ended in a defeat for the union and a victory for prime minister Margaret Thatcher and her conservative government. The number of working coal pits in Britain fell from 174 in to 1983 to six in 2009, leaving thousands in poverty.