1671: The Latest and Most Accurate

John Ogilby: America- Being the Latest, and Most Accurate Description of the New World (1671); the book is an English translation of Arnold Montanus’s De Nieuwe en Onbekende Weereld.

The title of this plate is “Viztlipuztli idolum Mexicanorum” —The Mexicans’ Idol of Viztlipuztli; the image purports to show the palace of Viztlipuztli, an Aztec idol. A later author provides this summary:

Their Chief was one they called Viztlipuztli whom they styled the most potent Lord of all Things, and to him they erected the most sumptuous Temple of the Kingdom in the City of Mexico. This Idol was made of Wood, but curiously adorned with Gold, Jewels, and Feathers. Ogilby gives us a Cut of him in a very Monstrous Shape. His Head, Face, Arms, and the upper Part of his Body, resemble those of a Man. He has a high Tuft of Feathers on his Head, tip’d with Gold, large Rings in his Ears, and Wings like those of a Bat proceeding from behind his Shoulders. On his Belly was represented the head of a wild Beast, somewhat like that of a Lion, with firery Eyes, a wide gaping Mouth full of Teeth, and a long shaggy Beard, which cover’d the Idol’s Thighs: His legs were like those of a Cow, straddling, with Claws in his Feet. In his right Hand he holds a Laurel Branch with a Buckler and a Plume of Feathers upon it, and in his left a Battoon of Command, full of crooked Streaks like Serpents. He sat in a triumphant blue Chair at the End of which was placed a Staff with a Serpent’s Head on it. Next the Shield lay four Arrows, pretended to be sent from Heaven. On his Claws were hung Jewels, Gold Boxes, and Shields, adorned with Feathers of divers Colours. There was a Curtain before him, which was never drawn but at Festivals. Acosta says, that two lesser Images stood near it, one of which, attended by 1000 People they carried at times to an Altar on a high Mountain, where they plac’d it, while the Multitude set all the Bushes about it on Fire, with great Shouts, and the Noise of Musical Instruments, Which to frighten the wild Beasts in the Woods, that they ran to the top of the Mountain, where they were inclos’d by the People, and many of them slain for an Offering to the Idol which was afterwards carried back to the Temple, and then the People made merry with the Venison. (source)

Huitzilopochtli was, in fact,  the national god of the Mexica, the Aztec civilization of Tenochtitlan (Mexico City). He was the god of war, the sun, and human sacrifice. 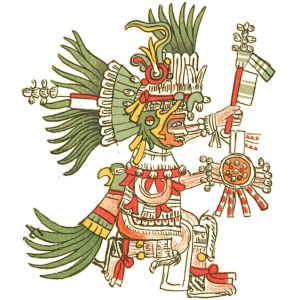 The name literally means something like “Hummingbird’s South” or “Hummingbird’s Left” and Huitzilopochtli was often portrayed either as a hummingbird or as an anthropomorphic figure with hummingbird feathers on his head and left leg. In iconographic representations, he had a black face and held a mirror as well as a scepter shaped like a snake.

Huitzilopochtli was believed to be engaged in a constant struggle with the darkness and required human sacrifice to give him strength.

The great Templo Mayor in Tenochtitlan was built in the 14th century and dedicated to Huitzilopochtli and Tlaloc, god of rain and agriculture; it was ultimately destroyed by the Spanish.

Image of Huitzilopochtli from the 16th century Codex Telleriano-Remensis.