The title of this painting is taken from a book by the artist John Ruskin, The Elements of Drawing (1857), where, in a footnote, Ruskin says that to see as an artist requires setting aside the learned perception of shadows and hues. We may look at green grass in the sunlight and think we see green grass—but in fact it’s yellow in the bright sun; we’ve just been socialized to see the yellow and perceive it as “green in the sun.” An artist needs to be able to see the yellow for what it is—and put it on the canvas. In this way, the artist—to Ruskin at least—seems to attain a grasp of the world outside of cultural perceptions:

The perception of solid Form is entirely a matter of experience. We see nothing but flat colours ; and it is only by a series of experiments that we find out that a stain of black or grey indicates the dark side of a solid substance, or that a faint hue indicates that the object in which it appears is far away. The whole technical power of painting depends on our recovery of what may be called the innocence of the eye; that is to say, of a sort of childish perception of these flat stains of colour, merely as such, without consciousness of what they signify,—as a blind man would see them if suddenly gifted with sight.

For instance: when grass is lighted strongly by the sun in certain directions, it is turned from green into a peculiar and somewhat dusty-looking yellow. If we had been born blind, and were suddenly endowed with sight on a piece of grass thus lighted in some parts by the sun, it would appear to us that part of the grass was green, and part a dusty yellow (very nearly of the colour of primroses); and, if there were primroses near, we should think that the sunlighted grass was another mass of plants of the same sulphur-yellow colour. We should try to gather some of them, and then find that the colour went away from the grass when we stood between it and the sun, but not from the primroses; and by a series of experiments we should find out that the sun was really the cause of the colour in the one,—not in the other. We go through such processes of experiment unconsciously in childhood ; and having once come to conclusions touching the signification of certain colours, we always suppose that we see what we only know, and have hardly any consciousness of the real aspect of the signs we have learned to interpret. Very few people have any idea that sunlighted grass is yellow.

Now, a highly accomplished artist has always reduced himself as nearly as possible to this condition of infantine sight. He sees the colours of nature exactly as they are, and therefore perceives at once in the sun-lighted grass the precise relation between the two colours that form its shade and light. To him it does not seem shade and light, but bluish green barred with gold. Strive, therefore, first of all, to convince yourself of this great fact about sight. This, in your hand, which you know by experience and touch to be a book, is to your eye nothing but a patch of white, variously gradated and spotted; this other thing near you, which by experience you know to be a table, is to your eye only a patch of brown, variously darkened and veined ; and so on : and the whole art of Painting consists merely in perceiving the shape and depth of these patches of colour, and putting patches of the same size, depth, and shape on canvas. The only obstacle to the success of painting is, that many of the real colours are brighter and paler than it is possible to put on canvas: we must put darker ones to represent them.

The two paintings in the painting are Paulus Potter’s The Young Bull (1647) and Monet’s Grainstack (Snow Effect) (1891): 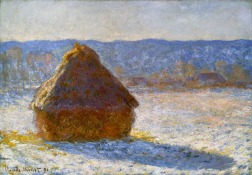