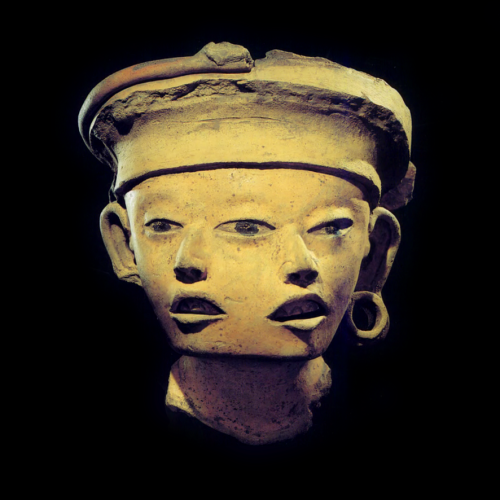 This earthenware fragment dates from 300-600 AD and was produced by an artist of the Remojadas culture—which flourished on Mexico’s Veracruz Gulf Coast from about 100 BC to 800 AD and is considered to be part of the larger Classic Veracruz culture. Little is know about the civilization, largely because almost no archaeological research has been done since the site was uncovered in 1949. The fragment measures 26.3 cm (10½ inches) in height and was likely part of an almost life-sized human figure.

Archaeologists believe the double faced image arises from a dualistic concept related to human nature (such as male-female, youth-old age, or life-death) as figures with similar faces have  been found in other sites in the region, dating from over a span of about a thousand years.

The piece belongs to Wally Zollman, a plastic surgeon from Indianapolis, and his wife Brenda; this image is taken from the catalog of an exhibition held at the Indianapolis Museum of Art in 1989. It is therefore part of a private collection of Native American art that at least one reviewer has called “anachronistic” at time when many such objects have been returned to the descendants of the cultures from which they originate.