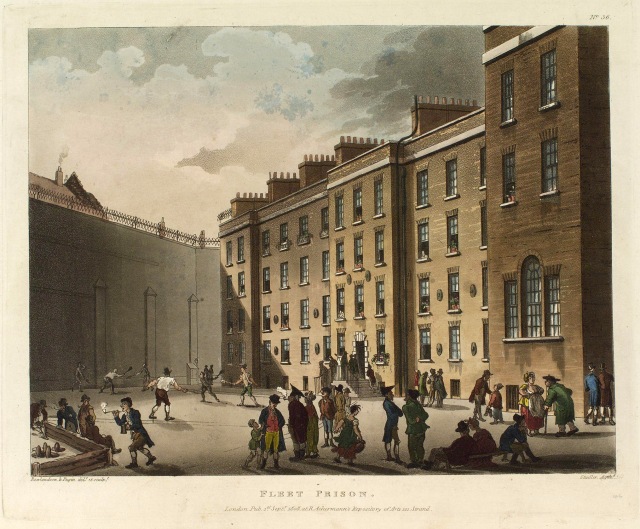 In the early 18th century, “Fleet Marriages” were clandestine and unsanctioned marriages that were conducted in London’s Fleet prison, or in the rough neighborhoods surrounding it. They took place away from the home parishes of the spouses, often without marriage licenses—frequently  because couples simply wanted to get married quickly or at low expense. By  the 1740’s, over half of all London weddings (up to 6,000 a year) were Fleet Marriages, with special “marriage houses” and taverns sprouting up to cash in on the phenomenon. They were ultimately outlawed by the 1753 Marriage Act.

For his book The Fleet: Its River, Prison and Marriages, published in 1834, John Ashton combed through the registers of these marriages and discovered another reason that people opted for a Fleet Marriage:

“20 May, 1737. Jno Smith, Gent. of St James Westr, Batchelor & Eliz. Huthall of St Giles’s Spr at Wilsons. By ye opinion after Matrimony, my Clark judg’d they were both women, if ye person by name John Smith be a man, he’s a little short fair thin man, not above 5 foot. After marriage I almost c’d prove ym both women, the one was dress’d as a man, thin pale face, & wrinkled chin.”

“1 Oct. 1747. John Ferren, Gent, Ser. of St Andrew’s Holborn Br and Deborah Nolan. Do Spr. The supposed John Ferren was discovered after ye Ceremonies were over, to be in person a woman.”

Fleet Prison was also the birthplace of racquetball and squash.