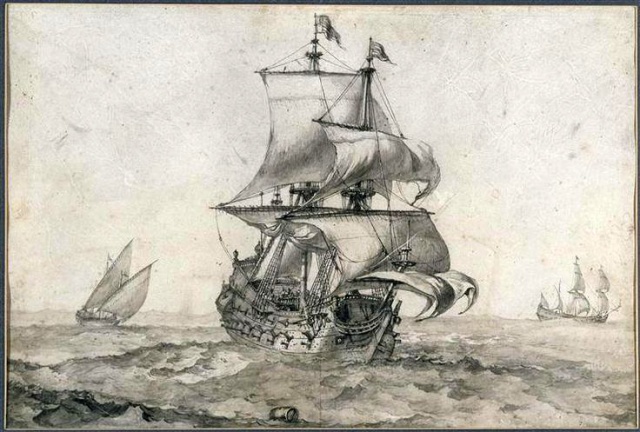 The following story I had from the mouth of the very person who was chiefly concerned in it. I mean the captain of the ship itself.

One Captain Thomas Rogers, commander of a ship called the Society, was bound on a voyage from London to Virginia, about the year 1694.

The ship was hired in London, and being sent light, as they call it, to Virginia, for a loading of tobacco, had not many goods in her outward bound, suppose about two or three hundred ton, which was not counted a loading, or indeed half her loading; the ship being very large, about five hundred tons burden.

They had a pretty good passage, and the day before had had an observation, whereupon the mates and proper officers had brought their books and cast up the reckonings with the captain, to see how near they were to the coasts of America; they all agreed that they were at least about an hundred leagues distant from the capes of Virginia. Upon these customary reckonings, and withal heaving the lead, and finding no ground at an hundred fathoms, they set the watch, and the captain turned in (as they call it at sea), that is, went to bed.

The weather was good, a moderate gale of wind, and blowing fair for the coast; so that, the ship might have run about twelve or fifteen leagues in the night, after the captain was in the cabin.

He fell asleep, and slept very soundly for about three hours, when he awaked again and lay till he heard his second mate turn out, and relieve the watch ; and then he called his chief mate, as he was going off from the watch, and asked him how all things fared: who answered, that all was well, and the gale freshened, and they run at a great rate; but it was a fair wind, and a fine clear night; so the captain went to sleep again.

About an hour after he had been asleep again, he dreamed that a man pulled him, or waked him, and he did wake. I am not sure but I think he said, the thing that waked him, bade him get up, that is, turn out and look abroad. But whether it was so or no, he lay still and composed himself to sleep, and was suddenly awaked again, and thus several times; and though he knew not what was the reason, yet he found it was impossible for him to go to sleep: and still he heard the vision say, or thought he heard it say, turn out and look abroad.

He lay in this uneasiness near two hours; but at last it increased so upon him, that he could lie no longer, but got up, put on his watch gown, and comes out upon the quarter deck; there he found his second mate walking about, and the boatswain upon the fore-castle, the night fine and clear, a fair wind, and all well as before.

The mate wondering to see him, at first did not know him: but calling, Who’s there? the captain answered, and the mate returns, Who, the captain? What’s the matter, Sir?

Says the captain, I don’t know ; but I have been very uneasy these two hours, and some body, or my own fancy, bid me turn out, and look abroad, though I know not what can be the meaning of it.

There can be nothing in it, but some dream, says the mate. Says the captain, How does the ship cape ?

South-west by South, says the mate; fair for the coast, and the wind east by north.

That’s all very good, says the captain; and so after some other usual questions, he turned about to go back to his cabin; when. as if it had been somebody that stood by him had spoke, it came into his mind like a voice, “Heave the lead, heave the lead.”

Upon this he turns again to his second mate: Mate, says the captain, when did you heave the lead? What water had you ?

About an hour ago, says the mate sixty fathom.

There’s no matter of occasion, sir, says the mate; but if you please it shall be done.

I don’t know says the captain, ’tis needless indeed, I think, and so was going away again; but was, as it were, forced to turn back as before, and says to the mate, I know not what ails me, but I cannot be easy; come, call a hand aft and heave the lead.

Accordingly a hand was called, and the lead being cast or heaved, as they call it, they had ground at eleven fathom.

This surprised them all, but much more when at the next cast, it came up seven fathom.

Upon this the captain in a fright bade them put the helm a-lee, and about ship. all hands being ordered to back the sails, as is usual in such cases.

The proper orders being obeyed, the ship stayed presently. and came about; and when she was about, before the sails filled, she had but four fathoms and a half water under her stern; as soon as she filled and stood off, they had seven fathom again, and at the next cast eleven fathom, and so on to twenty fathom; so he stood off to seaward all the rest of the watch, to get into deep water, till day-break, when being a clear morning, there were the capes of Virginia, and all the coast of America in fair view under their stern, and but a few leagues distance : had they stood on but one cable’s length farther, as they were going, they had been bump a-shore, (so the sailors call it) and had certainly lost their ship, if not their lives.

—Josiah Priest, The Wonders of Nature and Providence, Displayed: Compiled from Authentic Sources, Both Ancient and Modern, Giving an Account of Various and Strange Phenomena Existing in Nature, of Travels, Adventures, Singular Providences, &c (Albany, 1835)