1979: Eric Lanzetti Tells You What a Communist Is 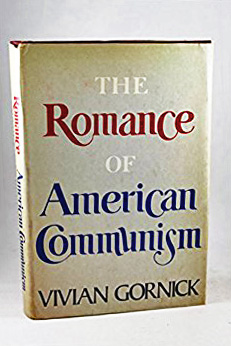 In 1938, after a childhood in a West Virginia mining town and a bright college career at Brown and Oxford, Eric Lanzetti —radicalized by the revolutionary fight against fascism in Spain—became a communist organizer on the Lower East Side of New York City.

Forty years later, Vivian Gornick interviewed Lanzetti for her 1979 book The Romance of American Communism; she tells this story:

Once, in the middle of a long conversation, I began to make a distinction between “real” Communists and fellow travelers or revolving-door Communists. Lanzetti turned on me and said: “Real Communists? What the hell does that mean, real Communists?” And he delivered to me the ultimate, mythic speech on what a Communist was. “I’ll tell you what a Communist is,” Lanzetti said. “An organizer goes into a factory. He works with the men, begins giving them leaflets, points out what’s happening at work, suggests relationships the workers didn’t see before. A worker becomes interested in what the organizer is saying. He begins coming to a few meetings. He begins to read. He gets a little larger a sense of things. He begins to think about capitalism. He learns about slavery and feudalism. He sees a pattern to this thing. He starts to feel history. Now he begins to see his life not only in him, or just in terms of the corporation, or the sonofabitch over his lousy life that keeps pissing on him. He sees a system of oppression older than God and he feels himself part of something his bigger than he ever knew existed. It eases his heart, gives him courage and stamina, he’s politicized.

“All this time he belongs to the [Communist Party]. Now, let’s say he moves. Drops out of meetings, gets to a new town. Delays looking up the Party. They don’t go looking for him. He doesn’t pay his dues, he’s dropped from the rolls, he’s no longer in the Party. Time passes. He doesn’t feel like going to meetings. Times change. He drifts away. Now, you tell me, what is that man? I’ll tell you what he is. That man is a Communist! And for the rest of his life he’s a Communist. Wherever some shitty thing is happening and he’s anywhere near it he is going to respond in a certain way and act on a certain understanding. And men like him are everywhere. These are the Communists, these are my people, my children, my own. . . .

“And we’re everywhere, everywhere. We saved this fucking country. We went to Spain, and because we did America understood fascism. We made Vietnam come to an end, we’re in there in Watergate. We built the CIO, we got Roosevelt elected, we started black civil rights, we forced this shitty country into every good piece of action and legislation it has ever taken. We did the dirty work and the Labor and Capital establishments got the rewards. The Party helped make democracy work.

“We’re the changing, shaping force that rears its head again and again. That’s what a Communist is. If we reach a hundred or five hundred with any action, any pamphlet, our ultimate effect is a thousand-fold that. Because it’s a way of feeling, a way of responding, a way of seeing the deeper meaning of this fucking profit system, and ultimately it’s all of a piece.”

1 Response to 1979: Eric Lanzetti Tells You What a Communist Is