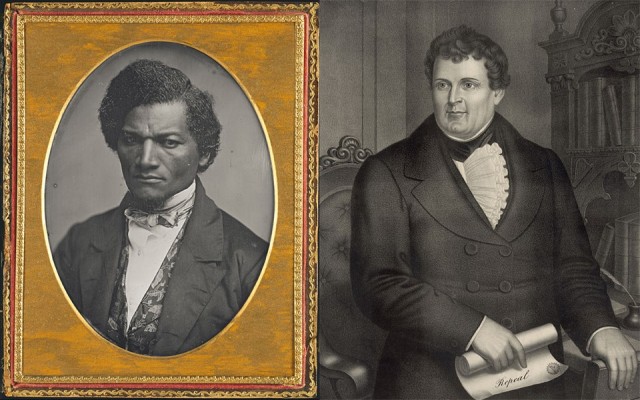 Shortly after the 1845 publication of his Narrative of the Life of Frederick Douglass, an American Slave, Frederick Douglass left the US for a two-year tour of Ireland and Britain. During his time in Ireland, he befriended and appeared on stage with Daniel O’Connell, the Irish Catholic nationalist, abolitionist, and advocate of Catholic emancipation. The episode in Douglass’s life is notable for the ways in which the American and Irish politics of oppression intersect, overlap, and, sadly, reinforce one another in spite of the efforts of these two great advocates of justice.

Douglass was 27 when he arrived in Ireland. He was immediately struck by a culture that treated him as an equal:

Behold the change! Eleven days and a half gone, and I have crossed three thousand miles of the perilous deep…Instead of the bright blue sky of America, I am covered with the soft grey fog of the Emerald Isle. I breathe, and lo! the chattel becomes a man. I gaze around in vain for one who will question my equal humanity, claim me as his slave, or offer me an insult. I employ a cab—I am seated beside white people—I reach the hotel—I enter the same door—I am shown into the same parlor—I dine at the same table—and no one is offended. No delicate nose grows deformed in my presence. I find no difficulty here in obtaining admission into any place of worship, instruction or amusement, on equal terms with people as white as any I ever saw in the United States. I meet nothing to remind me of my complexion. I find myself regarded and treated at every turn with the kindness and deference paid to white people. When I go to church, I am met by no upturned nose and scornful lip to tell me, “We don’t allow n—-s in here”! (source)

He was also overcome with the inhuman suffering of the Irish poor. When he arrived, the Great Famine was just beginning. Potato blight was decimating the crop across the globe, and in Ireland—where the potato comprised the core of poor Catholics’ subsistence diet under British colonial rule—a million people would eventually die and a million more emigrate, reducing the nation’s population by about a quarter. The famine, of course, would become a catalyst for Irish rebellion and the struggle for Home Rule; it was the plain result of a system of ethnic, religious, political, social, and economic degradation.

Though I am more closely connected and identified with one class of outraged, oppressed and enslaved people, I cannot allow myself to be insensible to the wrongs and sufferings of any part of the great family of man….I spent nearly six weeks in Dublin, and….I speak truly when I say, I dreaded to go out of the house. The streets were almost literally alive with beggars, displaying the greatest wretchedness–some of them mere stumps of men, without feet, without legs, without hands, without arms–and others still more horribly deformed, with crooked limbs, down upon their hands and knees, their feet lapped around each other, and laid upon their backs, pressing their way through the muddy streets and merciless crowd, casting sad looks to the right and left, in the hope of catching the eye of a passing stranger–the citizens generally having set their faces against giving to beggars. I have had more than a dozen around me at one time, men, women and children, all telling a tale of woe which would move any but a heart of iron. Women, barefooted and bareheaded, and only covered by rags which seemed to be held together by the very dirt and filth with which they were covered–many of these had infants in their arms, whose emaciated forms, sunken eyes and pallid cheeks, told too plainly that they had nursed till they had nursed in vain…..The spectacle that affected me most, and made the most vivid impression on my mind, of the extreme poverty and wretchedness of the poor of Dublin, was the frequency with which I met little children in the street at a late hour of the night, covered with filthy rags, and seated upon cold stone steps, or in corners, leaning against brick walls, fast asleep, with none to look upon them, none to care for them. (source)

Daniel O’Connell was 70 when Douglass arrived in Ireland in 1845; known as “the Liberator,” O’Connell had been a tireless and world-renowned critic of slavery since the 1820’s. (Slavery ended in Britain with the Slavery Abolition Act of 1833.) He had been an inspiration to Douglass, who had famously first thought of the Irishman as a hero when he heard O’Connell’s name cursed by his “owner” Thomas Auld. He first heard O’Connell speak in Dublin in September of 1845, describing the lecture as “powerful in its logic, majestic in its rhetoric, biting in its sarcasm, melting in its pathos, and burning in its rebukes.” Later, in Cork, they appeared on stage together, where he was introduced by O’Connell himself as “the black O’Connell.”

However, the politics of O’Connell’s stance on British rule and the conflict between Protestants and Catholics on the island and at home were tricky territory for Douglass. Despite the similarities between the social positions and treatment of African-Americans and Irish Catholics that he had witnessed, it made sense, even when he shared the stage with O’Connell, to avoid expressing an opinion on Irish independence—O’Connell’s primary cause at the time. (In a few early lectures in Ireland, Douglass had criticized US Presbyterians and Methodists for not opposing slavery and had noted that US Catholic churches did not have segregated pews; however, he soon realized that even such limited mentions were alienating to his audience in the highly-charged political atmosphere.)

Other forces may have been at play; Douglass was a Protestant himself of course, and not immune to the sectarian derision of Catholicism. He had also seen Irish Catholic immigrants in the U.S. support slavery—despite, for example, O’Connell’s 1841 call for Irish-Americans to join the anti-slavery movement. (O’Connell’s “Address from the People of Ireland to their Countrymen and Countrywomen in America” was ultimately signed by 60,000 Irish men and women.) Sadly, the fact that American abolitionists were largely elite evangelical Protestants who participated in the dehumanizing stereotypes of Irish immigrants likely fueled this racism instead of tempering it. Douglass also reproduced Protestant prejudices with his habit of ascribing Irish misery to intemperance and not political oppression. “The immediate, and it may be the main cause of the extreme poverty and beggary in Ireland, is intemperance,” he wrote. (See here and here.) (He drew similar conclusions about free blacks in the north; drunkenness and addiction have always been ways of characterizing the behavior of oppressed groups as irrational and of their own doing. )

Later in life, Douglass supported Irish independence, becoming a supporter of Parnell’s movement for Home Rule. He used the parallel between Irish Catholics and African-Americans to argue against discrimination—but also to point to the sad irony of social mechanisms that lead one oppressed class to participate in the oppression of another. If we are to succeed in our fight for freedom, we need solidarity across all forms of injustice:

Color prejudice is not the only prejudice against which a Republic like ours should guard. The spirit of caste is malignant and dangerous every-where. There is the prejudice of the rich against the poor, the pride and prejudice of the idle dandy against the hard handed working man. There is, worst of all, religious prejudice, a prejudice which has stained whole continents with blood. It is, in fact, a spirit infernal against which every enlightened an should wage perpetual war. Perhaps no class of our fellow-citizens has carried this prejudice against color to a point more extreme and dangerous than have our Catholic Irish fellow citizens. and yet no people on the face of the earth have been more relentlessly persecuted and oppressed on account of race and religion, than have this same Irish people. But in Ireland, persecution has at last reached a point where it reacts terribly upon her persecutors. England is to-day reaping the bitter consequences of her own injustice and oppression. Ask any man of intelligence, “What is the chief source of England’s weakness? What has reduced her to the rank of a second class power?” and if truly answered, the answer will be “Ireland!” But poor, ragged, hungry, starving and oppressed as Ireland is, she is strong enough to be a standing menace to the power and glory of England. Fellow-citizens! We want no black Ireland in America. (source)

When President Obama visited the Republic of Ireland in 2011, he made special mention of Douglass and O’Connell: “When we strove to blot out the stain of slavery and advance the rights of man, we found common cause with your struggles against oppression. Frederick Douglass, an escaped slave and our great abolitionist, forged an unlikely friendship right here in Dublin with your great liberator, Daniel O’Connell. His time here, Frederick Douglass said, defined him not as a color but as a man. And it strengthened the non-violent campaign he would return home to wage.”