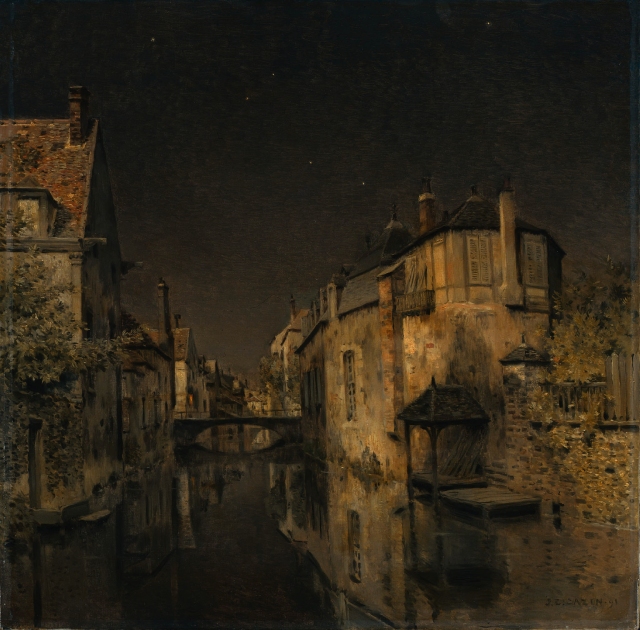 The Catalogue from Collection of Charles T. Yerkes, Chicago, U. S. A (1893) provides the following description:

The scene is located at Abbeville, on the river Somme, in France. One is readily impressed with the quiet that pervades this beautiful work. The presentation is that of a perfect moonlight night; the stars are visible in the deep blue of the midnight sky; the river, which forms the background, reproduces the exact coloring of the heavens, and in its clearness reflects the old houses that border it on either side with the utmost faithfulness. All is hushed in sleep, the only evidence of life being the light in the window of a house to the left just above the bridge. Signed in the lower right-hand corner: “J. C. Cazin, ’91.” (source)

Yerkes, a wealthy financier, had moved to Chicago to rebuild his fortune after a scandal on the east coast. As a financial agent for the City of Philadelphia, he had invested — and lost — a large sum of public money in a stock speculation. Unable to refund the city out of his own pocket, he was sent to prison, despite attempts to bribe his way out; a political deal involving then president Ulysses Grant, however, ended his sentence after seven months (Wikipedia). The painting is now in the Cleveland Museum of Art.