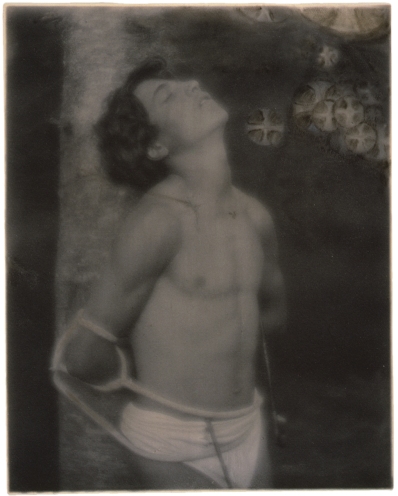 Although the traditional iconography shows Saint Sebastian pierced by arrows, this is not actually how he dies and becomes a martyr. The 13th century Legenda aurea, a collection of hagiographies by Jacobus de Varagine, recounts the story thus:

Saint Sebastian was accused to the emperor that he was christian, wherefore Diocletian, the emperor of Rome, made him come before him, and said to him: I have always loved thee well, and have made thee master of my palace; how then hast thou been christian privily against my health, and in despite of our gods? Saint Sebastian said: Always I have worshiped Jesu Christ for thy health and for the state of Rome, and I think for to pray and demand help of the idols of stone is a great folly.

With these words Diocletian was much angry and wroth, and commanded him to be led to the field and there to be bounden to a stake for to be shot at. And the archers shot at him till he was as full of arrows as an urchin is full of pricks, and thus left him there for dead.

The night after came a christian woman for to take his body and to bury it, but she found him alive and brought him to her house, and took charge of him till he was all whole. Many christian men came to him which counseled him to void the place, but he was comforted and stood upon a step where the emperor should pass by, and said to him: The bishops of the idols deceive you evilly which accuse the christian men to be contrary to the common profit of the city, that pray for your estate and for the health of Rome. Diocletian said: Art thou not Sebastian whom we commanded to be shot to death. And Saint Sebastian said: Therefore our Lord hath rendered to me life to the end that I should tell you that evilly and cruelly ye do persecutions unto christian men.

Then Diocletian made him to be brought into prison into his palace, and to beat him so sore with stones till he died. And the tyrants threw his body into a great privy, because the christian men should make no feast to bury his body, ne of his martyrdom. But Saint Sebastian appeared after to Saint Lucy, a glorious widow, and said to her: In such a privy shalt thou find my body hanging at an hook, which is not defouled with none ordure, when thou hast washed it thou shalt bury it at the catacombs by the apostles. And the same night she and her servants accomplished all that Sebastian had commanded her. He was martyred the year of our Lord two hundred and eighty seven. (William Caxton, trans.)