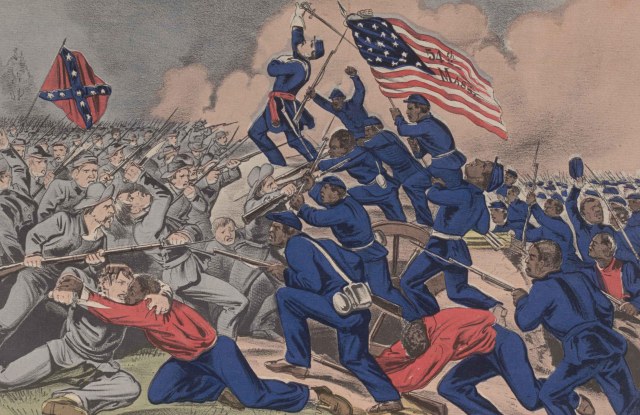 In Black Reconstruction in America (1935), W. E. B. Du Bois argues that a “general strike” by millions of enslaved African-Americans decided the outcome of the civil war. By rebelling against their masters, abandoning southern plantations, contributing their labor to the union cause, and joining the union army, they weakened Confederate forces and brought strength to the North:

Simply by stopping work, they could threaten the Confederacy with starvation. By walking into the Federal camps, they showed to doubting Northerners the easy possibility of using them as workers and as servants, as farmers, and as spies, and finally, as fighting soldiers…[and] by the same gesture, depriving their enemies of their use in just these fields.

It did not happen all at once, Du Bois notes:

It must be borne in mind that nine-tenths of the four million black slaves could neither read nor write, and that the overwhelming majority of them were isolated on country plantations. Any mass movement under such circumstances must materialize slowly and painfully. What the Negro did was to wait, look and listen and try to see where his interest lay. There was no use in seeking refuge in an army which was not an army of freedom; and there was no sense in revolting against armed masters who were conquering the world. As soon, however, as it became clear that the Union armies would not or could not return fugitive slaves, and that the masters with all their fume and fury were uncertain of victory, the slave entered upon a general strike against slavery by the same methods that he had used during the period of the fugitive slave. He ran away to the first place of safety and offered his services to the Federal Army. So that in this way it was really true that he served his former master and served the emancipating army; and it was also true that this withdrawal and bestowal of his labor decided the war.

this slow, stubborn mutiny of the Negro slave was not merely a matter of 200,000 black soldiers and perhaps 300,000 other black laborers, servants, spies and helpers. Back of this half million stood 3½ million more. Without their labor the South would starve. With arms in their hands, Negroes would form a fighting force which could replace every single Northern white soldier fighting listlessly and against his will with a black man fighting for freedom.

Transforming itself suddenly from a problem of abandoned plantations and slaves captured while being used by the enemy for military purposes, the movement became a general strike against the slave system on the part of all who could find opportunity. The trickling streams of fugitives swelled to a flood. Once begun, the general strike…went madly and relentlessly on like some great saga.

This was not merely the desire to stop work. It was a strike on a wide basis against the conditions of work….They wanted to stop the economy of the plantation system, and to do that they left the plantations.