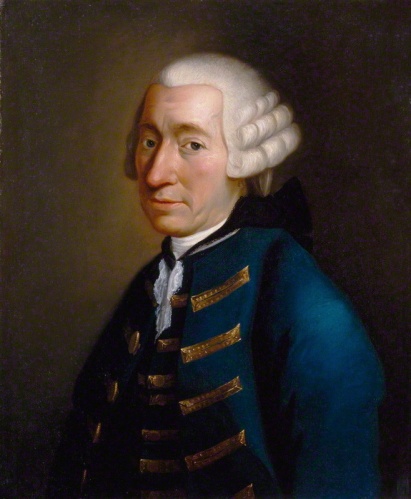 Tobias Smollett dedicated his third novel to himself:

You and I, my good friend, have often deliberated on the difficulty of writing such a dedication as might gratify the self-complacency of a patron, without exposing the author to the ridicule or censure of the public; and I think we generally agreed that the task was altogether impracticable.—Indeed, this was one of the few subjects on which we have always thought in the same manner. For, notwithstanding that deference and regard which we mutually pay to each other, certain it is, we have often differed, according to the predominancy of those different passions, which frequently warp the opinion, and perplex the understanding of the most judicious.

In dedication, as in poetry, there is no medium; for, if any one of the human virtues be omitted in the enumeration of the patron’s good qualities, the whole address is construed into an affront, and the writer has the mortification to find his praise prostituted to very little purpose.

On the other hand, should he yield to the transports of gratitude or affection, which is always apt to exaggerate, and produce no more than the genuine effusions of his heart, the world will make no allowance for the warmth of his passion, but ascribe the praise he bestows to interested views and sordid adulation.

Sometimes too, dazzled by the tinsel of a character which he has no opportunity to investigate, he pours forth the homage of his admiration upon some false Maecenas, whose future conduct gives the lie to his eulogium, and involves him in shame and confusion of face. Such was the fate of a late ingenious author [the Author of the “Seasons”], who was so often put to the blush for the undeserved incense he had offered in the heat of an enthusiastic disposition, misled by popular applause, that he had resolved to retract, in his last will, all the encomiums which he had thus prematurely bestowed, and stigmatise the unworthy by name—a laudable scheme of poetical justice, the execution of which was fatally prevented by untimely death.

Whatever may have been the fate of other dedicators, I, for my own part, sit down to write this address, without any apprehension of disgrace or disappointment; because I know you are too well convinced of my affection and sincerity to repine at what I shall say touching your character and conduct. And you will do me the justice to believe, that this public distinction is a testimony of my particular friendship and esteem.

Not that I am either insensible of your infirmities, or disposed to conceal them from the notice of mankind. There are certain foibles which can only be cured by shame and mortification; and whether or not yours be of that species, I shall have the comfort to think my best endeavours were used for your reformation.

Know then, I can despise your pride, while I honour your integrity, and applaud your taste, while I am shocked at your ostentation.—I have known you trifling, superficial, and obstinate in dispute; meanly jealous and awkwardly reserved; rash and haughty in your resentments; and coarse and lowly in your connexions. I have blushed at the weakness of your conversation, and trembled at the errors of your conduct—yet, as I own you possess certain good qualities, which overbalance these defects, and distinguish you on this occasion as a person for whom I have the most perfect attachment and esteem, you have no cause to complain of the indelicacy with which your faults are reprehended. And as they are chiefly the excesses of a sanguine disposition and looseness of thought, impatient of caution or control, you may, thus stimulated, watch over your own intemperance and infirmity with redoubled vigilance and consideration, and for the future profit by the severity of my reproof.

The novel is The Adventures of Ferdinand Count Fathom, published in 1753. The portrait is by an unknown artist.