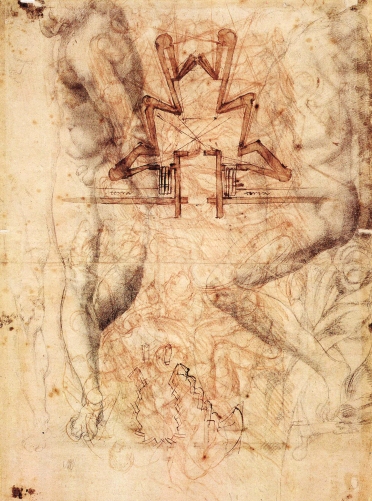 In 1527, a republican government was established in the city-state of Florence after residents ousted the ruling Medici family. The pope at the time, Clement VII, was himself a Medici—and he took affront at the rebellion and resolved to capture the city and reestablish Medici rule. He formed an alliance with Charles V, Emperor of the Holy Roman empire, and the two began to prepare for an assault on the city.

Florence had already begun to prepare for war, forming a committee to rebuild and expand the city’s walls and fortifications. To design the new structures, they called on the great artist and architect Michelangelo Buonarroti.

Michelangelo took on the job at great risk—refusing the pleas of the Pope to stay loyal to the Medicis and throwing his lot in with the republicans. He was given the title Governor and Protector General of the Fortifications of Florence and set to work on a number of designs.

Clement and Charles began a siege of the city in October 1529 and, in part defended by Michelangelo’s fortifications, the city’s forces held out for eleven months. Ultimately, the Republic of Florence fell and Alessandro de’ Medici was installed as its new ruler. Some citizens resisted and tried to keep the idea of the republic alive, but the war was over, and many of the republic’s leaders were executed or banished.

Michelangelo himself fled to Rome to avoid capture and possible death at the hands of Alessandro. There, his participation in the republic was forgiven by Clement, who granted the artist a generous stipend and, a few years later, commissioned him to paint his fresco of The Last Judgement on the wall of the Sistine Chapel.