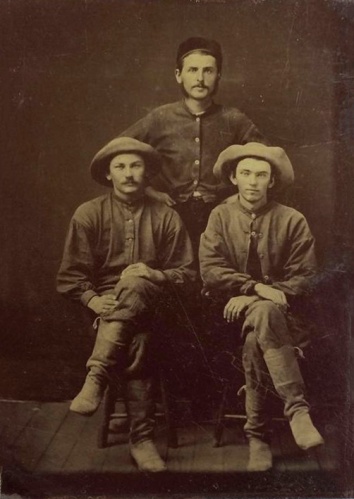 Were Nort Shannon, Dick Shannon, and Bud Merkel exceptionally morose as they sat before the small bunkhouse and about the flames of the blazing campfire? Was their recent failed adventure in ranching all over, and did Bud, in particular, think it time to pack it in? Was Bud a colorful speaker, in the great tradition of the heartbreakingly beautiful, yet very dry, American West? Was their late debacle tough luck, or just what was it? Had loco weed played an important part in their failure? If so, how? Pack what in? Just what is loco weed?

Was the silence gloomy? As gloomy as their hopes and dreams? Were the latter forever shattered? Is forever a long time? Had things been going well up until the time that they ran into the swarthy Del Pinzo, the greaser chieftain? Yet the boys were quite green insofar as the cattle business went, or still goes, were they not? What could they have reasonably expected to gain from the venture, as, well, inept as they were? What does “spill an earful” mean, and why did Dick suddenly blurt it? Was self-pity in the air? Were the three chums a-going to set there all night, for Christ’s sake? Just what are chums? Are there any chums left in this wide and hope-crammed world of ours? To whom is this world wide? To whom hope-crammed? The rich? With what else is this world crammed? Did Bud Merkel suddenly propose a fair idea, for a change? Were the Shannon brothers of Irish descent? In what way?