312 BC: A Musicians’ Strike in Ancient Rome 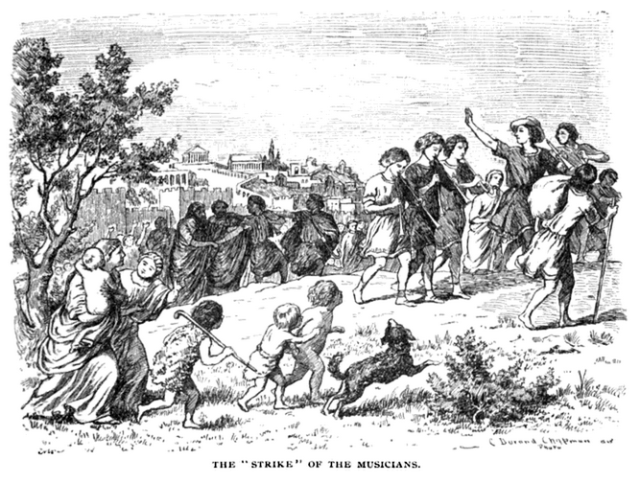 It is…a mistaken idea to suppose that strikes are modern inventions. They are indeed of ancient origin. Livy speaks of an or­ganized strike in the year 312 b.c., the description of which, although sufficiently humorous to make a background to a classical comedy, shows nevertheless the power of those ancient unions when de­siring to use the strike as a weapon for their rights.

Livy, of course, could not have suspect­ed the future developments and impor­tance of the strike; he therefore dismisses the subject as an affair of very little im­portance,” which he “would not have men­tioned were it not for its being closely con­nected with religion.” (Book ix., cap. 3o.)

The strikers on this occasion were the musicians, and the strike was caused by an act of the public censors, that seemed an infringement on the rights and privi­leges of the former. The musicians, who always assisted at the worship of the gods, enjoyed the privilege of annually cele­brating a feast at communal expense in the temple of Jupiter.

In the year 312 B.C., however, Rome hap­pened to be in financial straits; the Sam­nite wars had swallowed up millions; just then large sums were needed to fight the Etruscans, who had risen against Rome and who had a great and well-equipped army. The newly elected censors there­fore advised the Roman senate to curtail all the domestic expenses, especially to grant no money for the annual feast of the musicians.

The censors then conferred with the board of the musicians’ union, explaining the position and telling them to forego their usual festivities. The musicians could not see the necessity of being de­prived of their pleasure, they protested against the censorial order, and the board ordered a general strike.

Headed by their corporation standard the strikers paraded the streets of Rome, and finally left the city, marching toward the city of Tibur. In the latter place they encamped for an indefinite period, deter­mined not to return until the censors granted their annual feast in the temple of Jupiter Optimus Maximus.

Unimportant as this strike seems, it amounted almost to a calamity for the Romans in a religious sense.

It was evident that the assistance of the gods was needed in the coming war with the Etruscans. To gain this assist­ance public worship and sacrifices were necessary, at which music was indispen­sable. The musicians being on a strike the sacrifices could not be instituted, con­sequently all chances of obtaining the oracle of the gods were diminished.

As there was no way out of the difficul­ty, the Roman senate concluded to send a deputation to the municipal govern­ment of Tibur, asking it as a neighborly favor to intercede with the musicians and induce them to return. The Roman sen­ate also empowered the Tiburtian author­ities to promise the strikers any number of moral privileges, provided they entailed no financial outlay—Rome could not af­ford any just now.

The Tiburtians received the Roman dep­utation with much friendliness, promising to do all in their power to effect an ami­cable settlement of the difficulty, and at once communicated with the leaders of the strike. But the latter claimed their rights, maintaining deaf ears to the ear­nest solicitations of the Tiburtian fathers as well as to the seductive promises of the Roman senate.

There was no time for long negotia­tions, it being the day preceding the one set for the sacrifices, and as delay might displease the gods, the Tiburtian elders thought they owed it to their sister city, Rome, to do all they could in order to bring the strikers to terms.

They held a meeting, and at the sug­gestion of one agreed upon the following stratagem: the “famous Roman musi­cians” were to be asked to give a con­cert, which it was thought they would not refuse. They were then to be treated with plenty of a cheap but very strong quality of wine that belonged to the city. As they were musicians the chances were that they would drink themselves to sleep, in which case they were to be gently placed in covered wagons and quietly driven to Rome. This suggestion was carried out to the letter; the snoring strikers were driven to Rome, directly into the famous Forum, where everything was prepared for tomorrow’s sacrifices; the horses be­ing unhitched the wagons were left under guard till morning.

The services were to begin with the rise of the sun, and a large multitude thronged the Forum eager to witness the ceremo­nies. As the report was spread among the people that the musicians were in the Forum, and also by what stratagem they had been brought back from Tibur, gen­eral hilarity prevailed in the crowd. And when the musicians awoke from their in­ebriation and emerged from the wagons, they were greeted by a joyous roar of the multitude.

But they no sooner recognized their surroundings and discovered that they were outwitted, than they made motion to leave the Forum in spite of the Olympian humor of the Roman populace. Thou­sands of voices, however, entreated them to stay; and the censors, too, prevailed upon the musicians, with many kind words and promises, so that the latter consented to play on condition that their privileges for the Jupiter feast should be respected hereafter. The censors ac­cepted the condition, at the same time memorializing a special privilege to the musicians that permitted them annually —on the 13th day of June—to move in procession through the streets of Rome clad in costume, somewhat after the style of masks at a carnival, and to solicit con­tributions from the people. Nothing hindering, the sacrificial services began, and the music of the erstwhile strikers seems to have been especially enchanting and pleasing to the gods, for two years later the Roman legions, led by Fabius Maxi­mus, utterly destroyed the Etruscan army. Thus happily ended the first strike re­corded in history.*

*In fact, the first strike in recorded history took place in 1159 BC.