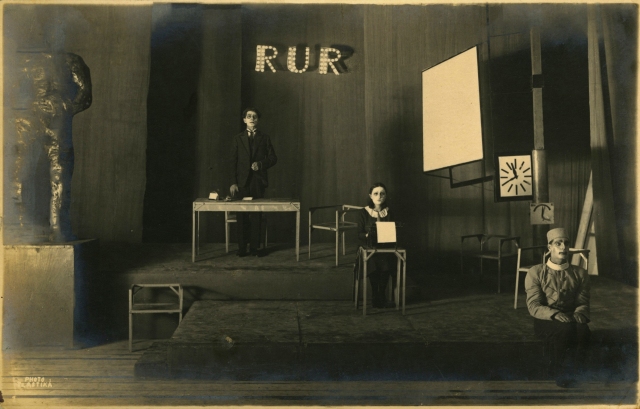 A performance of Karel Capek’s R.U.R. at the Haohel Theater, Tel Aviv in 1930. The play opens in Rossum’s Universal Robots (thus the title), a factory which manufactures artificial humanoids designed to be perfect obedient workers.

At first, the robots do obey their human masters, but in the play’s final act, the robots stage a rebellion, kill off all the humans, and consequently lose the secret to making new robots. At the very end of the play, two robots somehow gain the ability to feel love and compassion and disappear into the sunset to create a new world.

The play, first performed in 1921, is famously the origin of the word “robot” in its modern sense. The term in fact comes from the Czech robota, which means “forced labor.” (In early drafts of the play, Čapek had named the robots labori; it was his brother Josef who suggested roboti.)

Robots of the world, you are ordered to exterminate the human race. Do not spare the men. Do not spare the women. Preserve only the factories, railroads, machines, mines, and raw materials. Destroy everything else. Then return to work. Work must not cease.