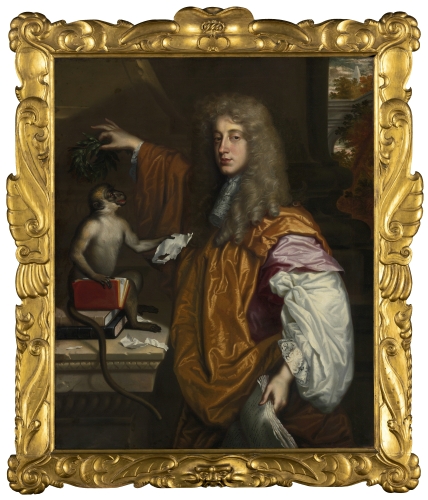 Were I (who to my cost already am
One of those strange, prodigious creatures, man)
A spirit free to choose, for my own share
What case of flesh and blood I pleased to wear,
I’d be a dog, a monkey, or a bear,
Or anything but that vain animal,
Who is so proud of being rational.

The infamous courtier, poet, and libertine John Wilmot, 2nd Earl of Rochester was the most notorious of the “merry gang” of inveterate rakes at the court of Charles II known for their witty conversation, dueling, public nudity, general debauchery, and rude remarks about the king.

Describing Rochester’s early years at court in a 1680 biography, Gilbert Burnet reported that

As he told me, for five years together he was continually Drunk not all the while under the visible effect of it, but his blood was so inflamed, that he was not in all that time cool enough to be perfectly Master of himself. This led him to say and do many wild and unaccountable things: By this, he said, he had broke the firm constitution of his Health, that seemed so strong, that nothing was too hard for it.

Huysmans’s portrait of Rochester shows him placing a poet’s laurel wreath on a monkey—likely modeled on an actual pet—as the animal ruins a book, tearing its pages to shreds.

Rochester died in 1680, at the age of 33, likely from venereal disease and alcoholism.