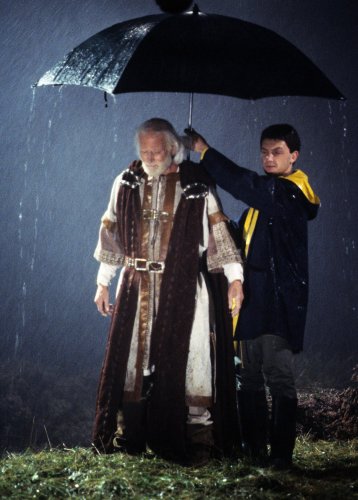 Laurence Olivier during a break in the filming of King Lear in 1983.

KENT
I know you. Where’s the king?

Gentleman
Contending with the fretful element:
Bids the winds blow the earth into the sea,
Or swell the curled water ‘bove the main,
That things might change or cease; tears his white hair,
Which the impetuous blasts, with eyeless rage,
Catch in their fury, and make nothing of;
Strives in his little world of man to out-scorn
The to-and-fro-conflicting wind and rain.
This night, wherein the cub-drawn bear would couch,
The lion and the belly-pinched wolf
Keep their fur dry, unbonneted he runs,
And bids what will take all.

KENT
But who is with him?

Gentleman
None but the fool.