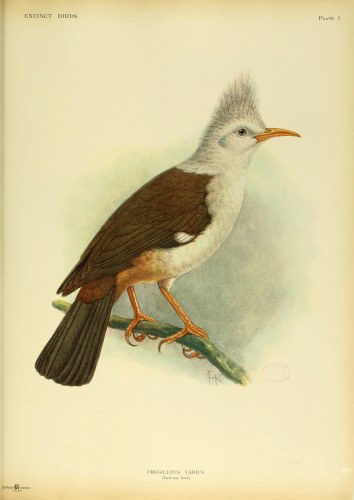 As long ago as 1674 a note about the “Huppe” exists, by “Le Sieur D.B.,” i.e., Dubois. He says, when describing the birds of Réunion (translated): “Hoopoes or ‘Callendres,’ having a white tuft on the head, the rest of the plumage white and grey, the bill and the feet like a bird of prey; they are a little larger than the young pigeons; this is another good game (i.e., to eat) when it is fat.”

Good descriptions and representations of the “Huppe” have been given in many places…but whether they were taken from males or females is generally not known. The sexes seem to be alike in colour, but the female is smaller, and has a shorter and straighter bill than the male. At least, this is the conclusion of Dr. Hartert, who saw the four examples in the museum at Troyes. As far as he could see through the glass all four seemed to be adult birds, but two were larger with longer and more curved bills, two smaller and with shorter and straighter beaks, so that they are evidently two pairs.

This bird seems to have become extirpated about the middle of the last century. The late Monsieur Pollen wrote in 1868 (translated): “This species has become so rare that one did not hear them mentioned for a dozen years. It has been destroyed in all the littoral districts, and even in the mountains near the coast. Trustworthy persons, however, have assured us that they must still exist in the forests of the interior, near St. Joseph. The old creoles told me that, in their youth, these birds were still common, and that they were so stupid that one could kill them with sticks. They call this bird the “Hoopoe.” It is, therefore, not wrong what a distinguished inhabitant of Réunion, Mr. A. Legras, wrote about this bird with the following words : “The Hoopoe has become so rare that we have hardly seen a dozen in our wanderings to discover birds; we were even grieved to search for it in vain in our museum.”

We are certain that Fregilupus existed still on Réunion in 1835, as Monsieur Desjardins, living on Mauritius, wrote in a manuscript formerly belonging to the late Professor Milne-Edwards: “My friend, Marcelin Sauzier, has sent me four alive from Bourbon in May, 1835. They eat everything. Two have escaped some months afterwards, and it might well happen that they will stock our forests.”

It seems, indeed, that specimens were killed in 1837 on Mauritius, where they did not originally exist. Verreaux shot an example in Reunion in 1832.

The names “La Huppe du Cap” and “Upupa madagascariensis” arose out of the mistaken notions that this bird lived in South Africa or Madagascar, but we know now that its real home was Réunion or Bourbon.

WE ARE AWARE OF THE FOLLOWING SPECIMENS PRESERVED IN
COLLECTIONS.

2 stuffed ones, one in good, one in bad condition, and two in spirits, in the Paris Museum.
4 stuffed in Troyes
1 stuffed, from the Riocour collection, in the British Museum. 1 in the Florence Museum.
1 in Turin.
1 in Pisa.
1, rather poor and old, in Leyden.
1 in Stockholm.
1 in the Museum at Port Louis, on the island of Mauritius.
1 in the collection of the late Baron de Selys Longchamps. 1 in Genoa.

—Lionel Walter Rothschild: Extinct birds: an attempt to unite in one volume a short account of those birds which have become extinct in historical times : that is, within the last six or seven hundred years : to which are added a few which still exist, but are on the verge of extinction (1907) (source)

1 Response to 1850: The Last Hoopoe Starling