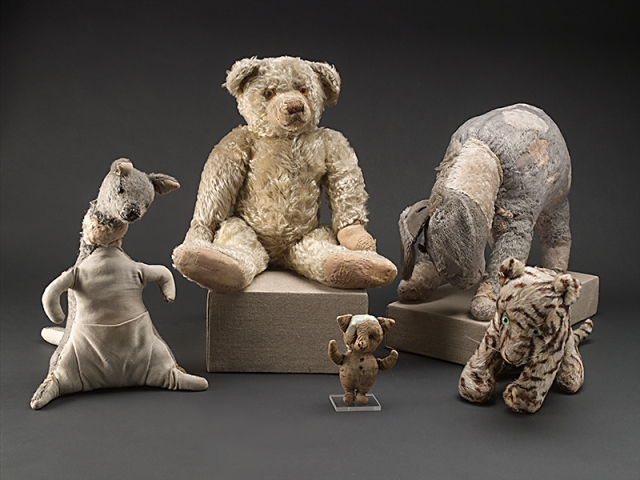 “Don’t Bustle me,” said Eeyore, getting up slowly. “Don’t now-then me.” He took a piece of paper from behind his ear, and unfolded it. “Nobody knows anything about this,” he went on. “This is a Surprise.” He coughed in an important way, and began again: “What-nots and Etceteras, before I begin, or perhaps I should say, before I end, I have a piece of Poetry to read to you. Hitherto—hitherto—a long word meaning—well, you’ll see what it means directly—hitherto, as I was saying, all the Poetry in the Forest has been written by Pooh, a Bear with a Pleasing Manner but a Positively Startling Lack of Brain. The Poem which I am now about to read to you was written by Eeyore, or Myself, in a Quiet Moment. If somebody will take Roo’s bull’s-eye away from him, and wake up Owl, we shall all be able to enjoy it. I call it—POEM.”

Christopher Robin is going.
At least I think he is.
Where?
Nobody knows.
But he is going—
I mean he goes
(To rhyme with “knows”)
Do we care?
(To rhyme with “where”)
We do
Very much.
(I haven’t got a rhyme for that “is” in the second line yet. Bother.)
(Now I haven’t got a rhyme for bother. Bother.)
Those two bothers will have to rhyme with each other Buther.
The fact is this is more difficult than I thought,
I ought—
(Very good indeed)
I ought
To begin again,
But it is easier
To stop.
Christopher Robin, good-bye,
I
(Good)
I
And all your friends
Sends—
I mean all your friend
Send—
(Very awkward this, it keeps going wrong)
Well, anyhow, we send Our love
END.

“If anybody wants to clap,” said Eeyore when he had read this, “now is the time to do it.”

“Thank you,” said Eeyore. “Unexpected and gratifying, if a little lacking in Smack.”

“It’s much better than mine,” said Pooh admiringly, and he really thought it was.

“Well,” explained Eeyore modestly, “it was meant to be.”

“The rissolution,” said Rabbit, “is that we all sign it, and take it to Christopher Robin.”

So it was signed PooH, WOL, PIGLET, EOR, RABBIT, KANGA, BLOT, SMUDGE, and they all went off to Christopher Robin’s house with it.

Image: Winnie-the-Pooh, Kanga, Piglet, Eeyore, and Tigger. The original stuffed animals that were given to Christopher Robin Milne when he was a little boy, ca. 1920s. (source)