Posted on September 7, 2019 by corvusfugit 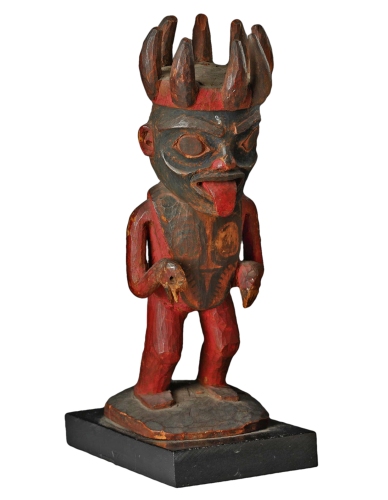 Every Tlingit clan in every major village was supposed to have its own shaman (’ixtˈ), who might also be a clan or house chief, uniting supernatural power with economic and ceremonial leadership….The functions of the shaman were several. He fought with the shaman of an enemy clan in war time, and furnished military intelligence to his own people, as reported by his spirits (yé’k). He sent his spirits for news of absent friends and relatives, to find lost persons, and, if not too late, to restore to human form those who had been “captured” and transformed by Land Otter Men… He brought good weather, restored fish runs, announced the warnings of the spirit, and furnished amulets for good luck. He cured those suffering from aggression by evil spirits, and instructed others in the use of devilclub branches to ward off “disease spirits.” Although the shaman had considerable medical and surgical knowledge, he personally undertook fewer and fewer cures during the later decades of the nineteenth century. His major function was to detect witches.

There were very few women shamans among the Tlingit, but they were judged to be as powerful as their male colleagues. One even brought to life a youth who had died, and another prophesied the coming of the Russians. The power of a shaman depended entirely on the character and number of the spirits he or she could call.